Supernova is the shit. Their live DJ sets blend tech, house and acid house, resulting in sick grooves, sounds and an original and eclectic style. Two italians, two mixers, endless possibilities. Local support by Joill and Keith Kraft.Free entry before 11 PM with RSVP at:www.modular-supernova.eventbrite.comJoin our mailing list at http://eepurl.com/HWLPHTickets: $10 Door.————————–—————-Supernova, IT (Defected, Noir, Lapsus)Supernova are Emiliano Nencioni and Giacomo Godi; an Italian DJ and production duo that have over the last decade made the transition from rising stars to established international talent, perhaps best known for their acclaimed and much-discussed collaboration with Kevin Saunderson on 2010’s ‘Beat Me Back’. They achieved their first notable success in 2007 when Sony BMG released their debut album ‘Downtown Underground, which included collaborations from the likes of GrandMaster and Melle Mel).

Looking ahead, 2013/2014 marks the 10th anniversary of Supernova and perhaps the busiest year yet for the duo, which will include their third (as yet unsigned) studio album, as well as a ‘Best of Supernova’ compilation to be released on their own Lapsus Music

JOill, Detroit-bred, has been calling San Francisco his home since 2001. His name is a combination of the classic American name, “Jo”, combined with his Korean roots & middle name,”ill.”

JOill has been performing musically since 1986. His background & training in Detroit in his early ages as a jazz saxophonist was a great platform for him to grasp the electronic side of music. Growing up by both Detroit & Chicago, these concrete-jungle-like classrooms gave him access to many styles of music early on such as Motown, Blues, Jazz, Rock & Roll, Hip Hop & of course, his main choice as a DJ, Electronic Dance Music. JOill has been creating “The GOOD VIBE,” on the dance floor as a Deep-Tech-House DJ since 1996. He has also been known to drop a sick, Old School-Motown-Soul infused-NuDisco-HipHop & Indie Clash set, as well. To try & classify him to one genre, would do no good. His electrifying style of music combines elements of deep, tech, nu-disco, & soulful house, that result in an infectious groove. JOill’s knack for selecting & pairing the right sounds/trax, have earned him notable, residencies like, Thursday nights at “BASE,” Friday’s at “THE BATTERY” & last of all w/ “MODULAR,” a notable Party Producing, San Francisco-DJ Collective.

JOill has played along side electronic music’s royalty, such as, Damian Lazarus, M.A.N.D.Y, Adriatique, BLONDISH, Nathan Barato, & UNER to name a few. He has also been known to move dance floors around the globe. Not only has he performed at prestigious clubs, parties & festivals around the U.S., he has & still is working internationally as well. You can find JOill gracing the historical stages of France & Bulgaria, the tropical paradises of Brazil & Mexico & the fairy-dusted deserts of Burning Man, to name just a few.

Keith Kraft grew up in south FL and has been a music enthusiast since he was a young child earning his first chin scar from spinning out dancing to Michael Jackson on his parents tile floor at the age 4. That was only the beginning of a passion that would only turn into his life. A classically trained musician, he took on a great interest in playing brass instruments at a young age and specialized in the trumpet until his other passion(stunt BMX) got in the way and after an accident his nerves in his lip were severed leaving them damaged and unable to produce notes through a brass mouthpiece.

Frustrated he took a break from playing instruments and focused his energy on school where he studied Aerospace engineering, Music Theory, and psychology. Years later he became well known in the South FL club scene for hosting several parties in Fort Lauderdale and Miami.

After moving to San Francisco at age 27 and becoming heavily involved in the house music scene he took on an interest in DJ’ing. He started off in his downtown apartment with two techniques 1200’s and an Allen & Heath mixer and after 8 months with help from mentors(Derek Bobus, Nikita, and Sharon Buck) Keith began playing out at nightclubs. A few months later he landed a gig opening for Jamie Jones at Vessel which gave him the confidence to push it even further.

He has been resident for parties such as “Bad Habits @ Monroe” and “Housepitality @ Icon” in SF and now has began producing his own events “SEX” and “Pressure @ Monroe” with Nikita.
Keith is know for his deep house, tech house, and techno music and always brings it with fresh new tracks.

Performing alongside some of the world’s top electronic music artists, Moby, Max Cooper, Super Flu, Tube & Berger and Martin Buttich, Always on the deep melodic tip, he continues to connect to listeners with his heavily influenced sounds of House & Techno. He draws his inspiration from the growing number of electronic music listeners around the world.
————————–—————-
MFYRS (Modular) 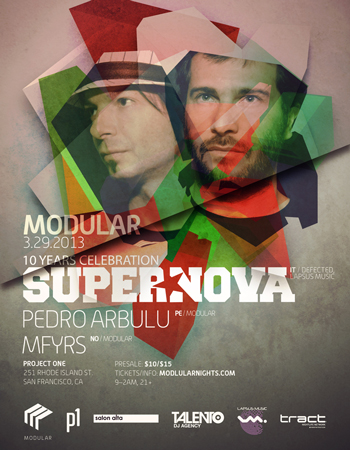