Hailing from Halle, the two Monkey Safari gents are real Nightlife addicts and indeed lovers of club culture. As owners of the legendary Charles Bronson club and purveyors of labels like What!What! Records (since 2008) & Mambo (since 2011), they truly are ambassadors of house and techno in their hometown.

Hailing from Halle, the two Monkey Safari gents are real Nightlife addicts and indeed lovers of club culture. As owners of the legendary Charles Bronson club and purveyors of labels like What!What! Records (since 2008) & Mambo (since 2011), they truly are ambassadors of house and techno in their hometown.

Happy, silly and fun sounds are the result of their creativity. Their music is tropically flavoured, crossed with an electric spark, ideal for drunken nights out, falling off heels and losing half of your drink to the dance floor. As a DJ team they merrily merge different music genres and styles from all over the globe: sometimes soft and melodic, sometimes deep and conscious, at others down and dirty, but one thing is sure, the mood is always happy. Warning: The wave their riding is high grade and infectious, this is some serious monkey business!

To many, Ben Pearce’s name is synonymous with ‘What I Might Do’, his oddly anthemic deep-house debut that dominated club floors across the world in 2012, whilst garnering support from the likes of Jamie Jones, Heidi and Pete Tong. Whilst this is an easy correlation to make (the track went platinum in Europe after all), those who have followed him since the beginning can testify that he is so much more than that, and the coming months will definitely see him come into his own.

Ben is very much an underground DJ first-and-foremost, aided in no small part by his vast musical knowledge and the ability to play across a wide range of musical genres. His skills behind the decks have not gone un-noticed, as shown by high-profile sets alongside the likes of Seth Troxler, Eats Everything, and Theo Parrish.

He’s also becoming increasingly known for his remixing abilities, and the coming year will see him lending his deft touch to the likes of Le Youth, Redlight and 2ndSun. There is also exciting new solo material on the horizon, as well as an increasingly busy tour schedule that will take him across Europe and more.

Not one to sit on his laurels, 2013 sees Ben Pearce drive forward with the conviction and certitude of someone who knows his dominance of clubland has only just begun…

Having performed alongside the world’s top electronic artists, such as Moby, John Digweed, Hernan Cattaneo and Nick Warren, Pedro has a passion for deep, dark and driving hypnotic music from deep house to tech house.

Hailing from the massive musical wonderland of Spokane, WA. Benjamin Jorgens has been hitting the decks with a frantic galloping motion for 6 years. He used to play original, live music, til’ taking a turn for the worst since moving to the most impractical city on earth for a live musician, San Francisco, CA, where he mostly just plays Pharrell remixes while drinking, heavily.

He’s opened for big name heavy hitters above and below the ground, like Stephan Bodzin, Kolombo, Sascha Braemer, Oliver Koletzski, Sebastien Leger, Hoj, Super Flu, Nicone, James Pants. Mux Mool, Dark Party etc. All of those guys are fucking cool, so he’s obviously cool too, by association, right? Anyway, I know you don’t read bios anyway, because you have way better things to do with your time. Get outta here you mongrel!
—
—
For more Modular info, upcoming events, photos, videos and music visit…
http://www.ModularNights.com/ 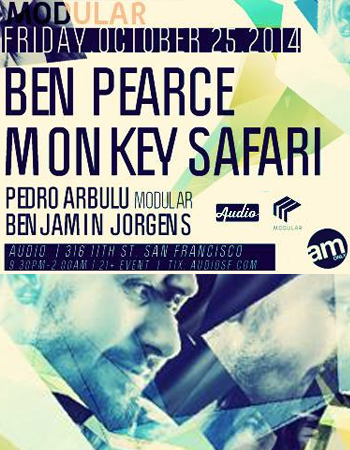