Described by DJ Mag as “one of the most talented new forces in modern dance music today” and by fellow future house innovators Art Department as their favourite producer, Lee has quickly catapulted himself into dance music’s collective consciousness. Lee and his Hot Natured partner Jamie Jones currently spearhead a whole family of like-minded producers that includes Robert James, Russ Yallop, Richy Ahmed and most recently Danny Daze who are currently re-writing the rulebook of how to make evocative and emotive house music.

Born and raised in Chicago, the birthplace of house, Lee now lives between London and Los Angels. Lee made his name on both sides of the Atlantic playing at clubs like The Standard Rooftop (Lost Angeles), fabric (London), The Marcy Hotel (Brooklyn), Watergate (Berlin), Spybar (Chicago) and DC10 (Ibiza). Lee’s rapid rise to prominence has been as much down to his unified but all-encompassing approach to DJing as it has to his pioneering take nu school house and synth-heavy techno, backed up by a string of hit releases on labels like No 19, Culprit, Wolf+Lamb and his own Hot Creations imprint. His unique sound, born out a lifelong love of classic house, 90s hip hop, 80s electro and Detroit techno, combined with fanatical grassroots support from clubbers in both Europe and North America, made him the highest new entrant in Resident Advisor’s Top 100 DJs poll last December, coming in at number 36.

While growing up in Chicago, Lee cut his teeth on the clubs and raves of the late 90’s, which sparked his interest in house and disco. However, it was a chance visit to Ibiza back in 2001, that changed his whole approach to music that helped steer his musical destiny for the next decade and beyond. It was in Ibiza that summer that he first became friends with Jamie Jones and the pair quickly formed a tight brotherly bond that has recently blossomed into their highly acclaimed Hot Natured partnership. Having spent several years abroad, and heavily inspired by time spent at seminal electro and deep house parties in Ibiza and East London, Lee decided to take all that he’d learnt in Europe and export it back to the USA.

After cutting his teeth in the competitive Chicago dj scene for the better part of a decade, Lee chose to uproot and set up in Los Angeles. Lee decided to work on music full time and soon fell in with Droog who were just setting up Culprit Records which became a platform for his early releases like ‘h.e.a.d.s EP’ in partnership with Jamie Jones. His bold move to Los Angeles soon started paid off as it helped draw international attention to both his DJing and production work. His real break through came with the release of ‘Grinding’ on Wolf+Lamb, a track that was picked up and played by DJs right across the spectrum of dance music.

Since then Lee has gone on to release a string of hits on a variety of labels including ‘The Edge EP’ ‘Equilibrium’, ‘U Got Me’ and most recently his ‘Starfruit EP’, all of which have been independently awarded ‘Tune of the Month’ in Mixmag at various points over the last year. In addition DJ Magazine voted ‘U Got Me’ as their number 4 favourite record of 2010, having already featured it in their ‘Stone Cold Killers’ section earlier in the year.

With this many accolades under his belt in such a short space of time, it would be easy for Lee to rest on his laurels but this couldn’t be farther from the case. He’s just about to unleash ‘Forward Motion’ his latest Hot Natured production with Jamie Jones, which was one of the breakout records of Miami this year and is shaping up to be one of the summer’s biggest hits. In addition to this he’s currently in the studio with Jamie Jones and ‘Forward Motion’ vocalist Ali Love putting the finishing touches on their forthcoming Hot Natured debut album, which he’s producing alongside his own debut artist album due out later this year. With plans to turn Hot Natured into a fully formed live act and tour it globally in 2012, this is already shaping up to be a career-defining year for Lee Foss.

Fast rising star and favorite in the Hot Creations camp, Patrick Topping is back with another smash hit, ‘Forget’ which reached the no1 spot on Beatport Tech House chart. Taken from the ‘Boxed Off’ EP, which features three dance floor bombs, just as we’ve come to expect from this talented youngster, all with that signature Patrick Topping sound, yet each completely unique. This comes hot on the heels of his ‘Get Beasty’ EP released in February this year, which received widespread acclaim. The title track ‘Get Beasty’ also reached number 1 and held the top spot for 3 weeks!

Fast rising star and favorite in the Hot Creations camp, Patrick Topping is back with another smash hit, ‘Forget’ which reached the no1 spot on Beatport Tech House chart. Taken from the ‘Boxed Off’ EP, which features three dance floor bombs, just as we’ve come to expect from this talented youngster, all with that signature Patrick Topping sound, yet each completely unique. This comes hot on the heels of his ‘Get Beasty’ EP released in February this year, which received widespread acclaim. The title track ‘Get Beasty’ also reached number 1 and held the top spot for 3 weeks!

At 25 years old, Patrick first built a DJ career around playing at his own popular club night in Newcastle (Motion), where he booked and played alongside some of the biggest names in the business. Last year he made his Ibiza debut, at no less than DC10 for Paradise and has secured a residency there this summer. Patrick continues to make his name heard on the international stage with Pulse Radio naming him One To Watch in 2014 and having featured on Pete Tong’s Future Stars.

Patrick impressed us all with his highly praised debut EP ‘Walk On’, which was released on Hot Trax in 2013, followed soon after by the even more successful ‘Any Amounts’ EP also on Hot Creations. His productions have an effortless swagger when it comes to working the dancefloor, knowing exactly how to work a crowd and making a name for himself with his extremely infectious basslines and dancefloor bombs.

Through the old-fashioned demos route, Newcastle based Patrick Topping caught the attention of the Hot Creations camp as they recognised his undeniable talent and Patrick’s innate ability to craft a banging record.

In popular demand, 2014 looks set to be a huge year for Patrick. With tracks being championed by Pete Tong on his legendary BBC radio 1 show, alongside releases on his home label Hot Creations, he has already released ‘Holiday’ on Defected and remixed Steve Lawler on his VIVa Music label. Look out for more remixes on other well respected labels, including Yousef on Circus Recordings and Sidney Charles on Avotre.

A staple and legend of the bay area scene, he’s been putting on events for over 15 years. VJing, organizing, and tracking down high caliber talent are his game. Now, at long last, he’s taking the reigns behind the mixer and presenting to you his unfettered love of music from his own library of properly curated trax.

Dax Lee is a leader of the San Francisco Bay Area electronic music scene. As one of the area’s top promoters, Dax has worked relentlessly over the past two decades to provide quality music at the finest events. As a VJ, he has broken new ground in designing and mixing compelling visuals. Now, at long last, Dax has taken the reigns behind the mixer to present his own unique musical vision.

Dax Lee grew up in the sunny mountains of Santa Cruz. His late father chose the name Dax from a fictional work by the author Harold Robbins. Diogones Alejandro Xenos – or ‘Dax’ for short – is the hero of the gritty heroic novel “The Adventurers.” As the book sleeve states, “Diogenes for the fabled seeker of truth, Alejandro for the Conqueror of the World, and Xenos being a family name … he was born in a land of suffering, passion, and brutality … and came to manhood with the fearless heart of a killer and the searing sensuality of an unmatched lover.” And while Dax is farthest from anything resembling a killer, the quality of the heroic which is his namesake definitely resides within.

Dax came of age in the nascent rave scene of Northern California in the early 1990‘s, from the Wicked Full Moon parties to the Sweatbox in Santa Cruz. By 1994, he embarked on his illustrious promoting career by co-promoting the second Raindance party at Brookdale Lodge in Santa Cruz. By the end of the decade, Dax had built a reputation for throwing some of the best underground parties in the area.

In 1999, Dax moved into VJ’ing with his first gig at the ESDJCO Invitational. His motivation to begin VJ’ing was to address what he felt was the weak point of most events: the visuals. Using innovative live video mixing techniques, Dax established himself as the premier VJ in the Bay Area, performing for the likes of Derrick May, DJ Dan, and Afrika Bambaataa.

In addition to his warehouse parties, Dax has thrown numerous club events with great success. The legendary Slide parties, the annual Capricorn event, and the Nexus camp at Burning Man are just some of the high-caliber functions Dax has masterminded.

With almost 20 years of events under his belt, Dax has developed a holistic approach to parties: every detail needs to be right in order for everything and everyone to come together. Taking this knowledge to heart, Dax moved from behind the scenes to behind the mixer. Dax brings a wealth of musical knowledge and party experience to his role as a DJ. From deep bass-driven house to vintage techno, Dax mixes the latest sounds together with classic vibes to create an enduring euphonic journey.

Since beginning his foray into DJ’ing, Dax has quickly established himself as a creative force behind the decks. Understanding that there is a right track for the right moment, Dax brings an eclectic palette to his DJ gigs. This musical range has garnered Dax opening slots for some of the world’s top DJ’s including Seth Troxler, Mark Farina, Little Dragon, and the Dirtybird crew. With a wealth of experience and knowledge at his fingertips, Dax Lee has developed into a selector extraordinaire and one of the San Francisco’s top talents. 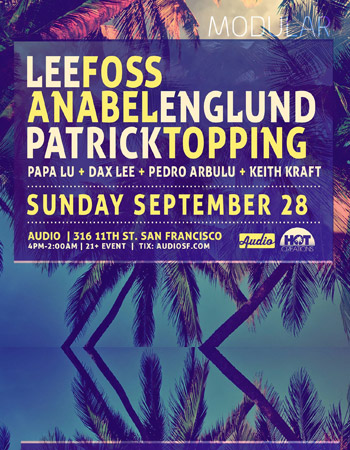