Over the last two years Lee Curtiss has made a name for himself creating primal, exquisitely deep and emotional dance tracks that pulse with life, sex, and humour, incorporating countless influences and genres but beholden to none. With his broad shoulders, even wider grin and keen sense of humour, Lee may give off the straight-shooting air of a Midwestern woodsman, but he’s got the ear, plain and simple. Lee Curtiss is an eccentric, an original, an innovator, a ten-year veteran of the electronic-music scene. His love of his craft shines through in his tracks’ every bump and shudder. From last year’s Visionquest remix of Kiki’s ‘Good Voodoo’, sighted by many as the underground smash of the year, to his ‘Black Door EP’ on Spectral (Mixmag’s techno ‘Tune of the Month’, October 09), Lee has an innate ability to create instantly memorable lead riffs that will stand the test of time.

Lee grew up in Western Michigan and eventually moved to Detroit, living the guitars-to-turntables, concerts-to-underground-parties arc shared by so many other children of the electronic music revolution. The similarities end there though. Lee displayed an immediate knack and passion for dance music that translated his love of Prince, Quincy Jones, and good old underground disco into a production and DJ style noted for its sensuality and effortlessness. Recently back in Detroit after an extended stay in Berlin (where he swapped ideas and lived with his close friends and partners-in-crime Seth Troxler, Ryan Crosson and Shaun Reeves), Lee continues to produce vital releases and remixes on labels including Spectral Sound, Get Physical, Dumb-Unit, Wolf+Lamb, Esperanza, and Mothership, and play DJ gigs the world over.

Lee’s previous trans-Atlantic tours have seen him play at some of Europe’s most important clubbing institutions including, Fabric in London, Watergate in Berlin, City Fox in Zurich, Kiss Klub in Nurnberg and the UK’s Bloc Weekender Festival. He tore up the Toilets in East London for Kubicle, supported long standing friends Wolf+Lamb in Paris and look his, as Resident Advisor described it, ‘libidinous tech funk’ to Bristol, Leeds, Cardiff and Aberdeen.

Lee’s live debut at Fabric earlier this year was met with universal praise and Matthew Dear was so impressed with his live show at the Spectral party at the Miami WMC that, he immediately invited Lee to join him as the live face of Spectral Sound, touring alongside Matt over the coming months. In June Lee is set to follow up his Beatport chart topping ‘Love In The Key of Freak’ EP on Get Physical with ‘I Can Hear You Arthur’, his tribute to Arthur Russel on Guy Gerber’s Supplemental Facts label which is set to be one of the summer’s biggest underground anthems.

Los Angeles-based artist, Lauren Lane, first cut her teeth as a DJ on the New York house scene and now occupies a sought-after residency at Sound Nightclub in Hollywood. Since Sound opened in January 2013 she has warmed up for numerous, world-renown artists in the ever-evolving industry. Along with her residency, Lane secured a spot at major festival staples such as Coachella, Wavefront Festival and BPM Festival this year. From Visionquest presenting her debut release, “Lazer Eyez” featuring Jaw (from dOP) last year, to remixing “Wild” for Nic Fanciulli, Lane has received support from international DJs including Seth Troxler, Carl Cox, Jamie Jones, Martinez Brothers, and TEED, among many more. 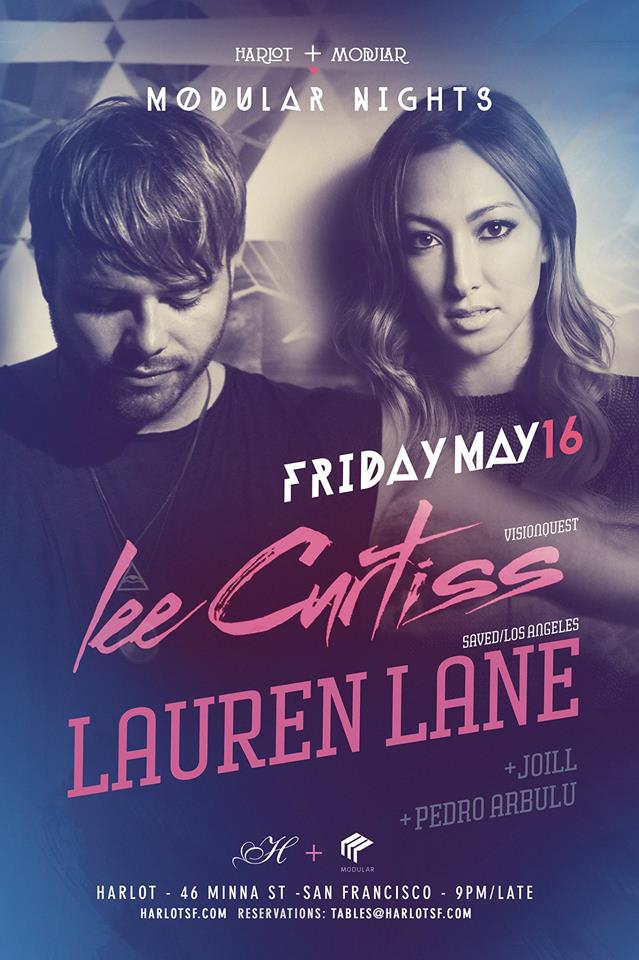