Dosem has always been on the forefront of what we like here at Modular, musically speaking, and the moment is finally here when we get to experience this talented artist and DJ in person. We are very excited as its been in the works for over a year. With major visa delays out of the way, you should be too, as the the time has finally come. See you on Thursday July 24.

Dosem’s emergence from the Spanish techno scene into the upper strata of the global DJ community has seen a lifetime of musical passion and experimentation explode into success.

The trajectory behind Dosem’s exponential rise first occurred when he signed to Technasia’s label Sino in 2008 with his eloquently carved club hit ‘Silent Drop’ (2009), which got picked up by several underground techno moths and spawned interest in the new, young Catalonian artist. From here his
profile flourished and following a re-release of the already cosmic classic ‘Beach Kisses’ on Green, he soon had material on imprints like Dig Deeper and Suara. However, the true marker to Dosem’s potential came in 2011 when he unveiled, to critical acclaim, his debut album ‘Parallel’. What followed was a string of sonic releases that included his ‘Origin’ EP on Christian Smith’s Tronic imprint, remixes for artists such Gregor Tresher, Max Cooper, Alexander Kowalski and Henry Saiz plus the
immersive ‘Believe’ EP on his own label Soundfate.

Forward to the present day and Dosem maintains his presence with a bold confidence choosing to eschew any stereotype and simply applying his own “Soul Techno & Hi-Tech Funk” approach. Neither house, nor techno or progressive, the constantly evolving fragments that make up his musical palette are expansive but assured.

Fusing the identity of Dosem’s sound together is a powerful dynamism of futuristic concepts and ideas. Releases such as his Bedrock single ‘Trust’ and his Tronic EP ‘From The Edge’ demonstrate this characteristic further and have garnered him pan wide support across the electronic spectrum, of which includes Sasha, Carl Cox, John Digweed, Joris Voorn and Laurent Garnier. On a roll with his current remix offerings, fans of the Dosem design have lapped up his edits of tracks such as Jim Rivers Intec release ‘Tangent’, Eelke Kleijn’s ‘Levensgenieter’ (Outside The Box) and Pig & Dan’s His global reach as a producer has given rise to his profile as a DJ and seen him become an initiated member of some of the most renowned parties in the world. Today his name can be found on billings for clubs and festivals around the world that include Berghain, Space Ibiza, Fabrik, Ministry of Sound, Ushuaia, Pacha, Rex Club, Fuse, , Awakenings, Klubbers Day and Monegros Desert Festival.

With the release of a second artist album and a body of masterfully crafted single releases due in 2013, there is no doubt that in his hands, techno will continue to take new forms…

Having performed alongside the world’s top electronic artists, such as Moby, Hernan Cattaneo, Tube & Berger and Oliver Koletzki, Pedro has a passion for deep, dark and driving hypnotic music from deep house to tech house. 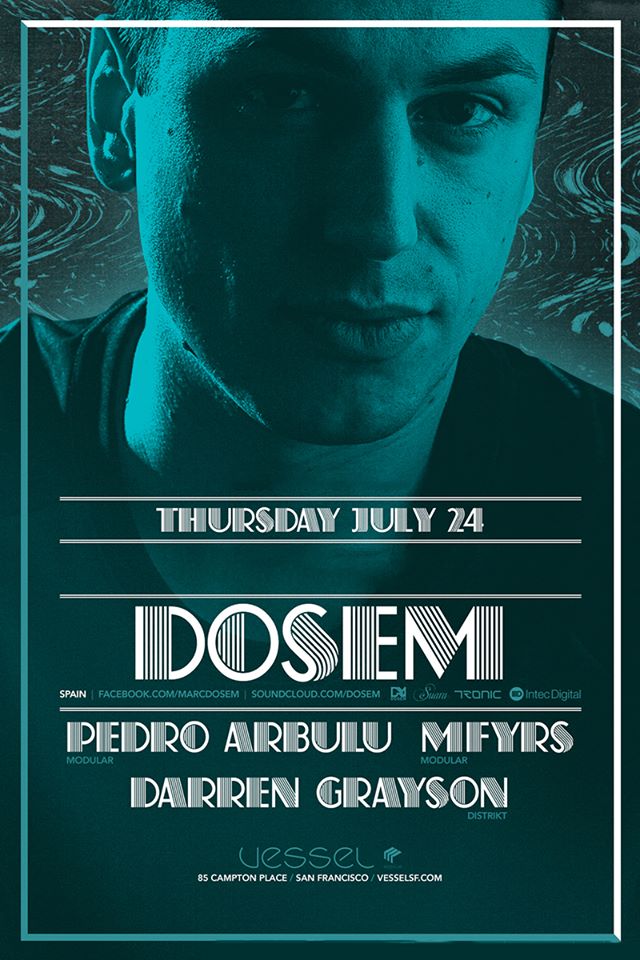